Green Borneo Kratom is named after the island of Borneo in Indonesia where it is cultivated, Green Borneo is considered to be one of the most potent strains available, however, unlike other kratoms, such as Maeng Da, the effects are not as intense, and as a result, people tend to experience the more balancing properties associated with it.

Also referred to as Green Vein Borneo Kratom, Green Borneo Kratom has a high makeup of alkaloids, which is what gives it its beneficial properties. This strain is great for those who don't want to be too wired or drowsy because Green Borneo Kratom meets somewhere in the middle and offers a nice balanced experience.

As for the active chemicals present in the strain, Green Borneo Kratom features some 25 different alkaloids, including the most notable: 9-Hydroxycorynantheidine, 7-Hydroxymitragynine, Mitraphylline, Speciogynine, and Mitragynine. Together these powerful alkaloids help to reduce pain, as well as also indirectly lead to the release of mood-boosting endorphins and oxytocin, which may result in the feeling of contentment and a greater sense of euphoria for users.

What are the effects of Green Borneo Kratom

A good dose of green kratom usually gives you some energy, positivity, and mental focus, but it also keeps you calm, and it's the calming part that makes it a good alternative to red kratom is you like the stimulating effects of green but also like the calming effects of red vein. 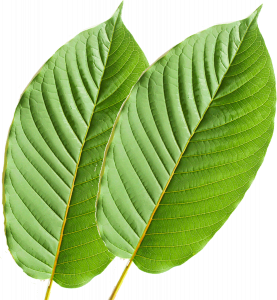 Green Vein Borneo shares a lot of the same alkaloids as the trees from which caffeine is derived, and that’s why it provides immediate stimulation to the brain.

One reason why this strain is so popular is that it has far fewer side effects than conventional medication, and even in comparison to different types of Kratom strains. It is not too stimulating, which means it won’t make your heart beat too fast. However, it is also not sedating, which means it won’t make you drowsy. An advantage is that it can be taken at higher dosages for increased pain-relief, without any significant side-effects. This gives it an edge over certain strains, which are known to produce some irritating side-effects at medium to high doses.

Kratom has not been approved for medicinal use by the FDA and no directions are provided here for human or animal use. The following information is based on a survey of kratom enthusiasts who have burned kratom personally and suggest such dosages.

A general dosage guideline is as below:

With an increase in dose, the strain becomes extremely potent. On a very high dose, the extreme sedative effect may not be suitable for everyone. The safe dosage for Green Borneo is no more than 5.0 grams a day.

Disclaimer: Our products are not for use by or sale to persons under the age of 18. The herbal products on this website have not been evaluated by the Food and Drug Administration. Our products are not intended to diagnose, treat, cure, or prevent any disease or to be taken internally. Our products are NOT sold for consumption. All products and their descriptions are intended for horticultural, educational research, or entertainment purposes only.

Within our Green Vein Kratom product, select the strain dropdown field and and choose "Green Borneo."